Ready to fish for shad on the Columbia River?

You’re at the right place. 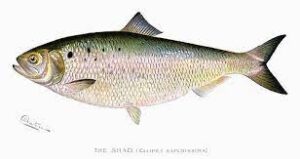 These guys come up the river in hundreds of thousands… per day. Around 4 million of them pass through the Bonneville Dam every season. They’re the best way to introduce someone new to fishing, as they’re willing biters and fight really hard for their size, you might even think you’ve hooked a salmon. Unlike salmon and steelhead, shad are not native to the Columbia. But like them, they are anadromous, meaning they spend most of their lives in the ocean and come to freshwater rivers to spawn.

These seasonal fish make their way up the Columbia and Willamette Rivers to spawn in early summer. There are many opportunities to catch them in the Columbia River, which means no daily limit, and you can catch them by the cooler full—or just for some serious fun rod action.

Also, shad spawn may coincide with salmon season, which could make for a great adventure while fishing. Just make sure you take note of the current regulations when catching salmon.

June and July are the best time to fish for shad. They will bite just about anything that is small and shiny. I have been known to catch them on a bare hook. They stop their feeding cycle when leaving the ocean, so the best bait for them is artificial lures like spinners and jigs.

They are also known to swim quite close to the shore, which makes them easily accessible to bank anglers, though boat fishing makes it even easier to access their migration lane or move with them as they travel.

They can be found in varying depths, depending on the location. Like walleye, they travel in schools, meaning when you hook one, don’t go too far—there’s more nearby. You’ll mostly need light tackle for shad fishing, except in cases of a strong current. The best time to fish for them is early mornings, though other times of the day work well too.

Shad run 16-24 inches, though some measure as long as 30 inches in length, and they usually weigh an average of 2-5 pounds. They also make excellent bait for sturgeon fishing.

BOOK A FISHING GUIDE FOR YOUR COLUMBIA SHAD FISHING

At Always Catchin’, we offer the best shad fishing guide experience on the Columbia River. From Buoy 10 (in Astoria) all the way up to the John Day River, we know the right places to look and the best methods to use.

Whether you’re in it just to have some angling action… or you’re a tourist out for an adventure… or you’re a family looking to have a fun-filled vacation… or you’re just more particular about the tasty filet you’ll get to devour (no judgments!)… We are fully capable of catering to your specific needs and desires.

Our boat is a 26ft. Alumaweld Formula Vee with a canvas top, which can seat up to 6 people comfortably. For larger groups, more boats can be added (call us for more information on group rates). We also provide all the bait and tackle needed for the trip—all you need to come along with is your fishing license which you can get here, some food and drinks, and we’re ready to go.

A trip with us includes:

Ready to have your Columbia shad fishing adventure? Book your trip with us here and we’ll get back to you immediately, or give us a call at 541-375-0717.

Looking to gift a trip to a friend, family, or loved one? We offer gift certificates.